(Libby Giesbrecht/650 CKOM)
Two Saskatchewan women got a ride home from a pair of strangers this week after cancelled flights left them stuck in Calgary.
There has been no shortage of chaos at Canadian airports this week, as severe winter weather affected flights around the country. The delays and cancellations left thousands scrambling, trying to find a way home for the holidays. Sometimes, however, someone just needs to be in the right place at the right time.
That’s what happened with Wilna van Beek and her friend Karen Huston on their way back to Saskatoon from Cancun. 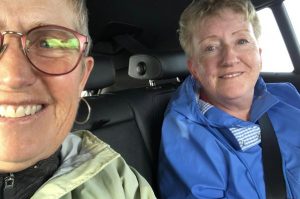 Wilna van Beek (left) and her friend Karen Huston were able to get a ride back from Calgary with two strangers who rented a car after their flights were cancelled. (Wilna van Beek/Facebook)
The flight from Cancun went smoothly, van Beek said, but when they landed in Calgary for a connecting flight to Saskatoon, things started to look worse and worse.
The pair had a four-hour layover, and van Beek said she started to get an uneasy feeling about leaving Calgary when she looked at the departure board and saw a lot of cancelled flights. When they got to the gate, van Beek said the pair learned their flight was delayed for an hour, but then came the announcement they were dreading.
“About 15 to 20 minutes before we are supposed to board, the lady at the WestJet desk … made the announcement,” she said. “ ‘(Your flight) is cancelled. Go pick up your bags at Carousel 1. Have a great night. Click.’ That’s it.”
At that point it was already 1 a.m., and van Beek said there were hundreds of others trying to figure out how to reschedule their flights.
The pair stayed overnight with a friend of van Beek’s in Calgary, which she said was lucky, as most hotels in the city were already fully booked. The next day, she said, they returned to the airport to figure out their next steps. They didn’t get any information from the airline about new flight options, she added.
The line for customer service was incredibly long, van Beek said, and they were told the chances of getting help that day were “very slim.”
Like many others, the pair figured they would rent a car and drive back to Saskatoon, but when there weren’t any cars left to rent, van Beek said she tried a different tactic out of desperation — standing in line and shouting. 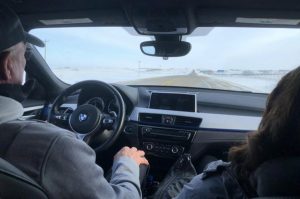 A couple who offered Wilna van Beek and Karen Huston a ride home after their flights were cancelled. (Wilna van Beek/Facebook)
“I just announced it: ‘Is anybody in this line going to Saskatoon? Because we need a ride,’ ” van Beek explained.
That’s when a couple waiting to pick up the keys to their rental spoke up and offered to give the stranded pair a ride back to Saskatchewan.
Naturally, van Beek said she offered to pay for half of the rental and the gas on the trip.
But the journey still had one speed bump left.
The pair who offered them a ride back to the province was only going as far as Delisle, which is about a 30-minute drive from Saskatoon.
Luckily, van Beek said she knew another friend who lived in Delisle, and that friend offered to pick them up and drive them the rest of the way.
In the end, Huston was reunited with her family in Foam Lake, and van Beek returned to her family’s farm.
“I’m just really grateful, listening now what’s happening all over Canada,” she said. “I’m just like, ‘Thank you, God.’ ”
This site is protected by reCAPTCHA and the Google Privacy Policy and Terms of Service apply.